The five guys that broke my heart on Valentine’s Day

If you read my last post, you know I took a spontaneous adventure to Fairfax, VA to watch my boys, VCU, play against their rival GMU at the Patriot Center – they had the most epic Valentine’s date of the season. My adventure began with a yellow poster board, gold glitter, and a very serious question. On one side it read: “Be My Valentine Shaka!” With those words, I meant it, I really wanted that win, it was the only thing I wanted for Valentine’s day… my heart was full of black and gold love, and I wanted Shaka Smart to seal the deal with a victory, pushing those Patriots out of 1st place.

Driving fearlessly north on the interstate I realized I needed to fully prepare sir Panama of what exactly he was getting into by sharing a ticket with this black-and-gold fanatic. I don’t think even my words prepared him for the anxiety he’d witness in that nail-biting game. Seated in a section with mostly green and yellow, we boldly boo’d when needed and cheered excitedly while feeling those dirty looks glaring behind, beside, and in front of us. The game was tight and more intense than my little heart could handle on this special love day. But we were winning for the majority of the game, this was a calming reassurance (okay, that’s a huuuuge exaggeration, but the calming part sounded good. In all honesty, there was nothing calming about this game). At about 11 minutes left, I decided now was time to make my sign seen by the world… time to hunt down those tv cameras.

My sister had seats on the floor three rows behind the basket (I swear she knows everyone. That girl is ridiculous with her connections). I grab my sign and make my way down the narrow steps, head held high, marching down through the sea of green and gold poised head-honcho alumni. Evidently I looked out-of-place. After I sat down with her, I looked around and could see the most evil looks directed our way as if we were two Goths sadistically sacrificing baby lambs in the middle of a thousand bubbly cheerleaders. Head-honcho dude called security over, pointed strongly at me, “herrrrr… that girl in black and gold… checcccckkkkk herrrrrrr ticket.” So my ticket got checked, shoulda seen the look on their faces when my ticket was legit. Yep. I belonged there. Don’t hate.

While down there I made sure to bounce my sign around a little… showing off both sides with hopes of also reaching pretty lady who shall remain nameless in Chicago by way of tv cameras with the other side of my sign… I don’t think it worked though, the cameras, for some odd reason, just were not interested in my story, either one of them. Imagine that. How rude. It’s not like it was an intense game or anything. Sorry, lady, here it is: 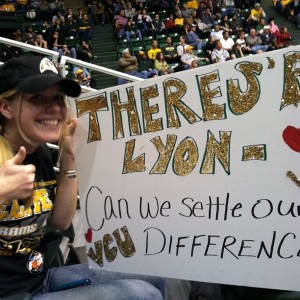 (You see, pretty lady who shall remain nameless, she was a gmu cheerleader… we never could see eye-to-eye on basketball. I was hoping in the spirit of Valentine’s day, we could settle our differences… I may now retract my request at this time though).

Back to my seat I went to scare sir Panama a little more with my anxiety. 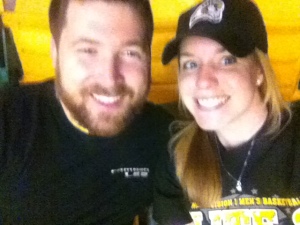 Then it came down to 48 seconds… we were up. The guy next to us (a VCU fan) decides he’s going to take off before the traffic get’s crazy – hey with 48 seconds what can happen – he thought. I waved him back (no clue who he was, but a vcu fan means bff-forever-and-always) “you can’t leave, 48 seconds is a long time! You leave now you’ll jinx us for sure!” Right then, mason fans go wild – 3 point shot… dude stands still… we make two foul shots, we’re up by four, with 10 seconds on the clock… dude leaves, again he thinks, “what can happen in 10 seconds…” I warned him again, but he left (see what I’m doing here, building my scapegoat… gotta have someone to blame)… they make another 3-pointer in those 10 seconds… we’re up by one point with two foul shots to take… we miss one foul shot, make the other, putting us up by two points… 3.8 seconds left… the shot happens… the shot from the movies… it was like time stood still… those 3 seconds will probably be Sherrod Wright’s best three seconds of his life… and the 3 seconds that broke my heart. Mason won by way of a 3-pt buzzer shot, all net…  beautiful shot. One point… one… point. I just stood there my hands on my head as time stood still… it was like the slow motion scene in a movie where it takes 10.9 seconds for one toe to lift an inch off the ground as the cheerleaders, fans, and mascot jump simultaneously in the air. I couldn’t move. Heart. Broken. My poor boys, Shaka… oh Shaka… I guess I got my answer to my very important question. GMU Patriots, you broke my heart… my little hopeful heart. VCU, you boys played so well, really a fantastic game – you didn’t break my heart, I don’t know that you really could if you tried, you’ve had it for 25 years, no breaking it now, we’re in it for the long haul, you’re forever stuck with me. Heads up, you have more games to win, a tourney to push for, and a spot to take back.

Still, a top Valentine’s adventure on my list. Thanks sir Panama, Shaka, sister with the rockin’ seats, VCU basketball – because you still have my heart.

And no thanks to the 5 guys that broke my heart… gmu boys, you are just a bunch of heartless heartbreakers. Until we meet again…

I’m told that there’s an upside to this… The up side?… the Bulls won! and Adventure lady & Adventure lady’s husband won their soccer game. Good job guys. Haha.