“Would you tell me, please, which way I ought to go from here?”
“That depends a good deal on where you want to get to.”
“I don’t much care where –”
“Then it doesn’t matter which way you go.”
― Lewis Carroll, Alice in Wonderland

Driving around the bend on 24 toward Chattanooga I had no idea where I was headed or what I would find. As I made it around the last curve my jaw dropped. It was as if I drove straight into a Narnia-like valley. The river flowed through and along the mountains, the sun was rising just perfectly reflecting on the river, and my excitement grew in discovering the beauty I was about to explore.

Snap, back to reality… signs started to pop up for exits and I had no idea where I was headed. Hm… I’ll just keep driving, there has to be something that will tell me where I need to be. Eventually I found my way to downtown, but nothing looked open yet, so I kept driving thinking there had to be something. That’s when I found North Shore. It was fate. Over the bridge, across the Tennessee river was this quaint area lined with boutique shops, restaurants with character, and a thriving art scene. Done. I’m in.

My purpose for stopping in Chattanooga was a bit different than the reasoning behind all of my other destinations. I had a very focused mission for this visit.

Through my research for FredXchange, I stumbled across multiple PR & economic development case studies on Chattanooga‘s development over the last ten years. Chattanooga has a fascinating story that peaked my nerdy interests — they have the largest fiber optic infrastructure in the entire United States. Basically, their internet is faster than yours… like, a LOT faster. The Gig City, as they’ve become to be known, is a tech heaven. But it’s more than this infrastructure that peaked my interest. All the articles I’ve read about the project displayed a culture like none I’ve ever read about before. It seemed as though their community truly worked together to not only make this project happen but to prove the error in Walter Cronkite’s statement that Chattanooga was the dirtiest city in the country; both public and private sectors worked hand-in-hand with communication professionals to share their story with the world. It’s fascinating but how true could their brand, “Chattanooga can do” really be? Was this place for real or was it all just a big PR stunt to increase job creation and mold perceptions into a more positive light?

Conclusion: The stories don’t do this place justice. Each person that shared their version of the “Chattanooga can do” story told me endless facts, happenings, and tidbits about the city that left me salivating for more. I could have spent hours talking with each of them. Never have I experienced a community that was so proud of where they lived or the growth of their city; never have I experienced a community that demonstrated a brand through-and-through better than a business could ever do. The “Chattanooga Can Do” concept is, in my opinion, a true statement. From the Volkswagen development, to the aquarium production, to the re-purposing of the walking bridge, to the dedication in green living with a high percentage of LEED certified buildings, and the magnitude of their job creation capability stories… I was floored that no matter who told the story, the brand was strong and it truly represented their community.

I’m so thankful I stopped into The Good Dog that morning to spend a few hours researching before hitting the streets to interview a number of diverse people on this subject. The employees at The Good Dog introduced me to deeper stories, the lay of the land, and the amazing Chattanooga hospitality. They were just the kickoff of my exploration though. I had the opportunity to pick the brain of Jim Ingraham with EPB (a community owned electric company). 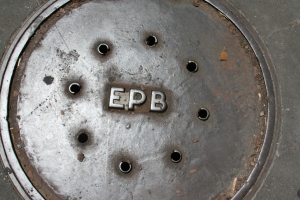 He led and developed the business plan for the fiber-optic infrastructure project. He helped maintain a community-focused project to be sure this was something the community wanted. He worked to create a culture at EPB that was customer service driven and cut costs for power outages, service time, and so much more. J.Ed. Marston with the Greater Chattanooga Chamber of Commerce only further confirmed the stories I heard from Jim. J.Ed. was able to share a deeper history with me from a business community standpoint. The major correlation between these stories was deeper than the facts, it was about the passion in what they were doing with the community of Chattanooga. There was a passion behind this project that made it what it is now. There was an eagerness to share with me any piece of the story they could and connect me with anyone that could give me more. That kind of story sharing I’ve found to be very rare, but in Chattanooga, it’s part of who they are.

Imagine if everyone felt this passionate about their own cities. Imagine if this was our country. Imagine what we could accomplish. Impressive isn’t it? Inspired?

I am… Chattanooga definitely raised the bar for the rest of my stops.

7 thoughts on “More than its brand, Chattanooga showcases community passion.”