So the 30 day challenge hasn’t gone quite as good as I had hoped… but I promise my weekend was well worth the slip up this early on. This past weekend was one of the best weekends I’ve had in awhile. Saturday triggered some really ridiculously good memories that may involved Buffett, Daisy Duke shorts, and a lot of inappropriate things I probably shouldn’t have been exposed to as a child.

You see, I grew up with parrotheads for parents… I mean it, parrotheads… not like the squawking, feathery animals… that would just be weird. More like the hippy-ish, paradise-chasing, hawaiian shirt wearing, Jimmy Buffett fanatics. Yep, that would be my parents. And to many parents’ horror or concern, I grew up going to at least one of his concerts every summer since I was eight. They were possibly some of my favorite family memories… don’t judge, I promise, they were good parents, maybe a little crazy… well, a lot bit crazy, but good nonetheless.

This past Saturday I went with a group of friends to a Buffett concert in Wisconsin. Not sure why I thought it’d be some kind of different from those I’d grown up going to… but maybe I was just a little rusty… it’s been a few years, give a girl a break… I know jeans were a bad choice.

I may have had a stranger, but more specifically a steady-hand dentist stranger, cut my jeans down to shorts because the heat was unreal.

I may have even seen more boobs than I ever wanted to see in a lifetime, but I am a girl, so it’s not like I haven’t seen them before. 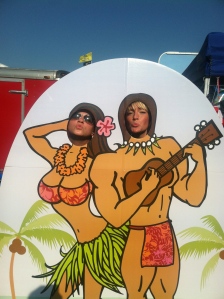 And I definitely saw the full spectrum of Buffett fans… from those wild college kids that can’t handle their alcohol, to the old-timer that knew every word to every song, to the stuffy woman that likes the music but is “above” the shenanigans, to the couple that want to sit at the concert and scold the people in front of them for dancing in the way of their view, to the hula girl that just wants to dance no matter what’s playing… yeah… there’s one of these at every Buffett concert.

Each made me chuckle and took me back to the memories I have of different run-ins as a kid with my parents with those wildly different characters I just described. Don’t worry my mom typically covered my eyes when boobs were flashed or my dad plugged my ears when the song “Get drunk and screw” came on… probably the only song of his I don’t know every word to, and they definitely encouraged us to dance regardless of the grumpy couple that may or may not have been behind us.

Those concerts were probably what I looked forward to most about summer… it was one of the few times my family could actually enjoy each other without arguing over something stupid… and even if we did, I can’t for the life of me remember it. Sometimes I really miss those outings we had, all five of us together. I don’t always like to reminiscence about my family younger years, because I find that I’m still a little numb from my parents’ separation in my later years… but reflecting on some of those summer adventures we had…  it really put me in a good place.

What’s your favorite memory with your family?